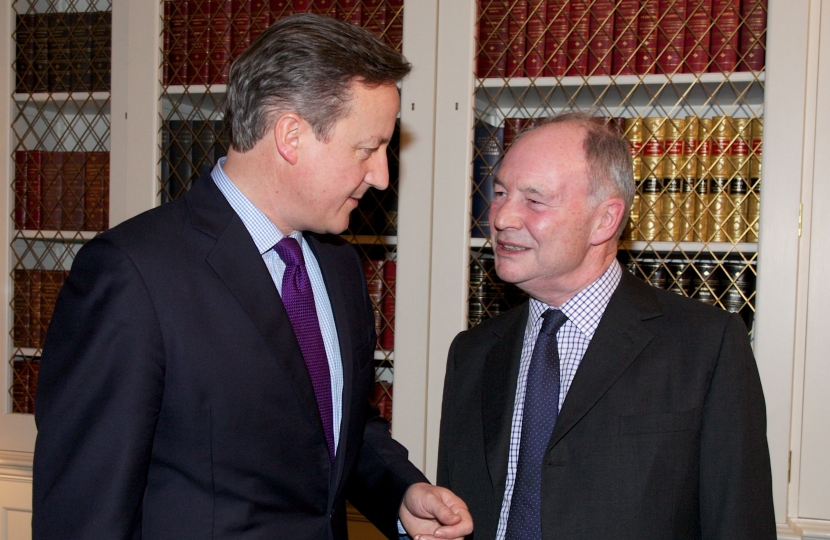 Discussions have taken place at Downing Street about tackling crime and improving policing throughout Warwickshire.

It follows a meeting arranged by Philip Seccombe, Conservative candidate for Police and Crime Commissioner, and Prime Minister David Cameron at No 10.

The candidate said it was “fantastic” to meet Mr Cameron so he could praise the efforts of local officers as well as discuss his six point plan to improve policing in Warwickshire.

A Chartered Surveyor by profession, Philip has lived and worked in Warwickshire for 27 years, running his own business from offices in Kineton and Shipston-on-Stour.

Philip also served in the Territorial Army for 25 years, rising to the rank of Colonel, and is currently Chairman of West Midlands Reserve Forces and Cadets Association.

As well as talks with Mr Cameron the Conservative candidate also met with Home Secretary, Theresa May, during his visit to Downing Street.

Philip Seccombe said: “It was fantastic to meet the Prime Minister so I could tell him about the great work of local police officers as well as to share my vision for a safer Warwickshire.

“I have a six point plan to improve policing with a focus on increasing the visibility of police by boosting neighbourhood policing and I was very glad the Prime Minister approved.

“We also talked about how Government is keeping local residents safe by protecting the police budget and investing to tackle new threats like cyber-crime.

“The meeting showed that it is vital Warwickshire elects a Conservative Police and Crime Commissioner who can access those at the very top of Government often to discuss and find solutions for local issues.”