Member of the European Parliament for the West Midlands

Anthea is far from your average MEP. With a formidable background in business and an impressive track record in community and voluntary work, she's also highly experienced in politics. A champion of pragmatic conservatism, Anthea has been a lifelong member of the Conservative Party.

Taking her seat as an MEP in December 2011, Anthea was appointed as the Conservative Employment Spokesman in January 2012. Re-elected by the people of the West Midlands in May 2014, She serves on the Agriculture committee and is the Employment spokesperson in the European Parliament.

Her background as a Party Campaigner is extensive and includes periods as a County Councillor, Parliamentary candidate, Constituency officer and service at Regional and National level.

For the past twenty years she has been a director of MCP Systems Consultants - an independent management consultancy company, based in Ross-on-Wye. She is also a partner in the family agricultural small-holding.  Anthea won the European Woman of Achievement Award for Business in 1997 and, in 2009, MCP won a national award for technological innovation in the Health Service.

A former County Secretary of the Federation of Small Businesses, Anthea is now an Ambassador for the FSB’s Real Life Entrepreneur Campaign. With her extensive business experience she is well placed to campaign on behalf of small businesses and against the red tape that hampers enterprise and innovation.

Anthea lives with her husband, Frank Myers, in Herefordshire where she is also a partner in the family’s agricultural small-holding. 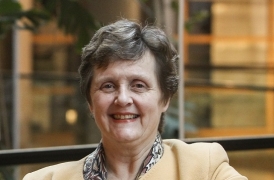